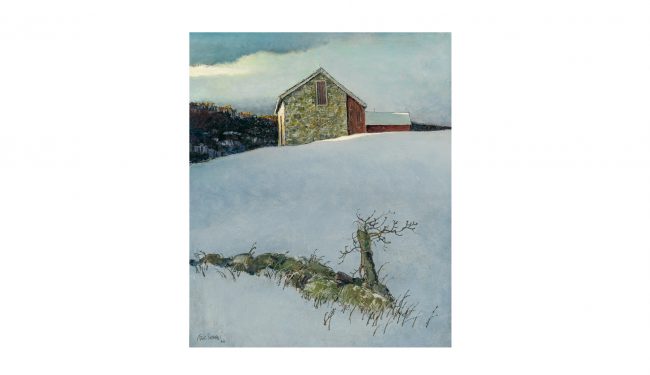 Eric Sloane was born Everard Jean Hinrichs in 1905 to an upper middle-class family. He took an early interest in art and learned to paint letters and signs from his neighbor the noted font inventor, Frederic Goudy. As a young artist he painted the markings on planes flying out of Roosevelt Field in Long Island. Famed American aviator, Wiley Post, taught Sloane how to fly in exchange for painting lessons. Aviation would become a central theme for Sloane as seen in lot 22, The Sentinel. Amelia Earhardt is said to have purchased his first cloud painting and his largest is on the wall of the Smithsonian Air and Space Museum in Washington D.C. (a commission he earned at age 75).

Sloane left home at a young age and worked as a sign painter in various locations, most notably a stay in Taos, New Mexico. In 1925, he traveled throughout the Northeast where he became enamored with the covered bridges, barns, stone walls and farmhouses dating to the colonial era. He felt the spirit of America in the early architecture and would paint, draw and write about his perspectives for a career that spanned six decades. In the 1950s he started writing and sketching books on his version of Americana, focused primarily on New England and Pennsylvania farmhouses, barns and landscapes. In 1953 he purchased and restored a farm in Brookfield, Connecticut and moved to various towns in the region of Lake Candlewood including Merryall and Warren where kept a home until 1985. He painted early American scenes especially the barns and covered bridges of Western Connecticut.

The present lot, Last Snow, depicts a scene typically seen in southeastern Pennsylvania with a stone farmhouse, red barn, and rolling hills dappled with light. Biographer, James W. Mauch, chose this painting as the cover image for his retrospective catalog Aware. He notes that the painting “It is a farm so typical of southeastern Pennsylvania with its stone house, rolling, tree-topped hillsides, enormous red barn and white-spired church in the distance.”

Attuned to architecture and weather, Sloane’s paintings capture the spirit of a place by taking into consideration every visual element and clue in the architecture and landscape but also the effects of the air on the light and shadows. In addition to his success as an artist he is credited as an authority on rural American architecture and early American tools. His extensive tool collection outgrew his home in Warren and he donated them to the Sloane-Stanley Museum in Kent, Connecticut.