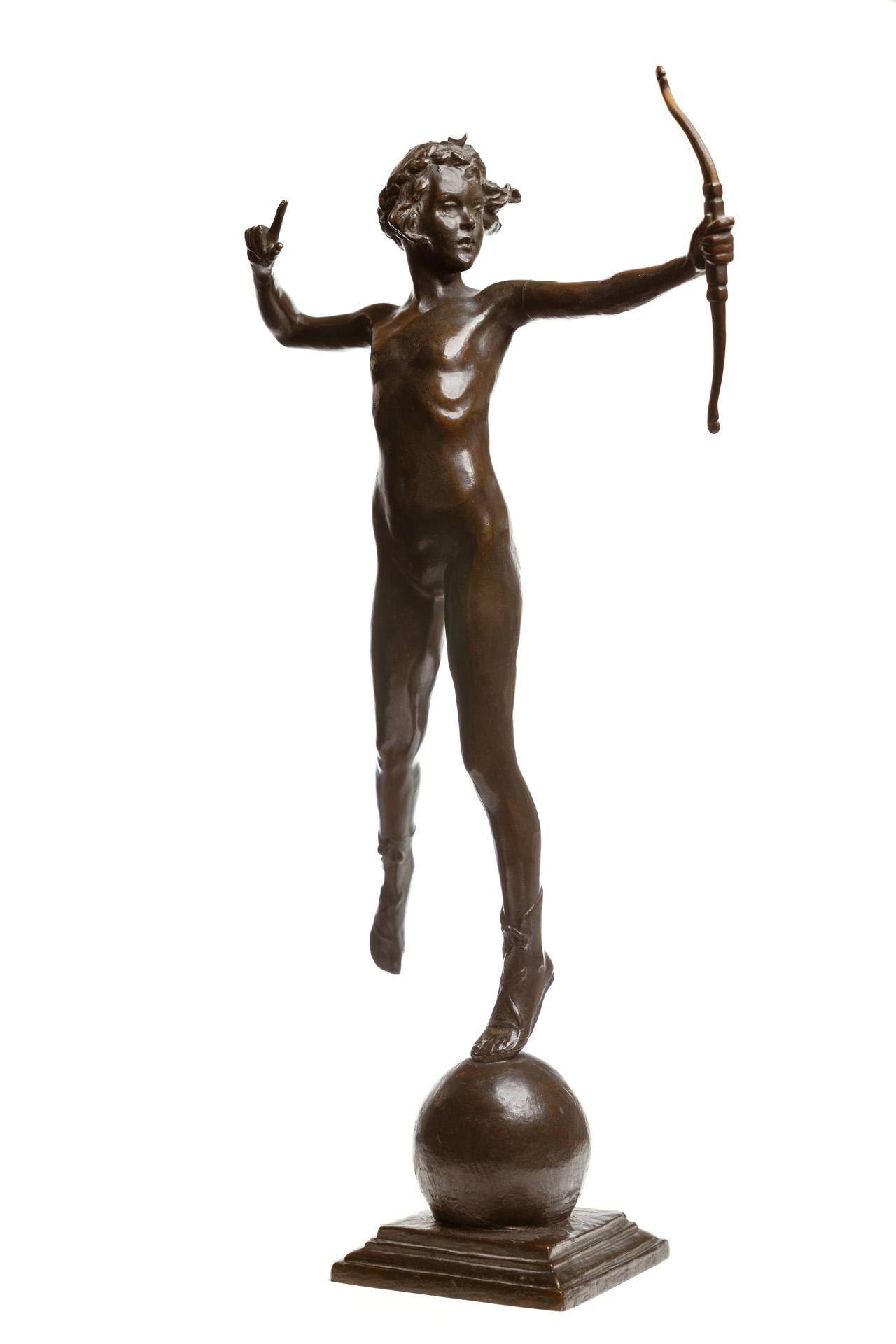 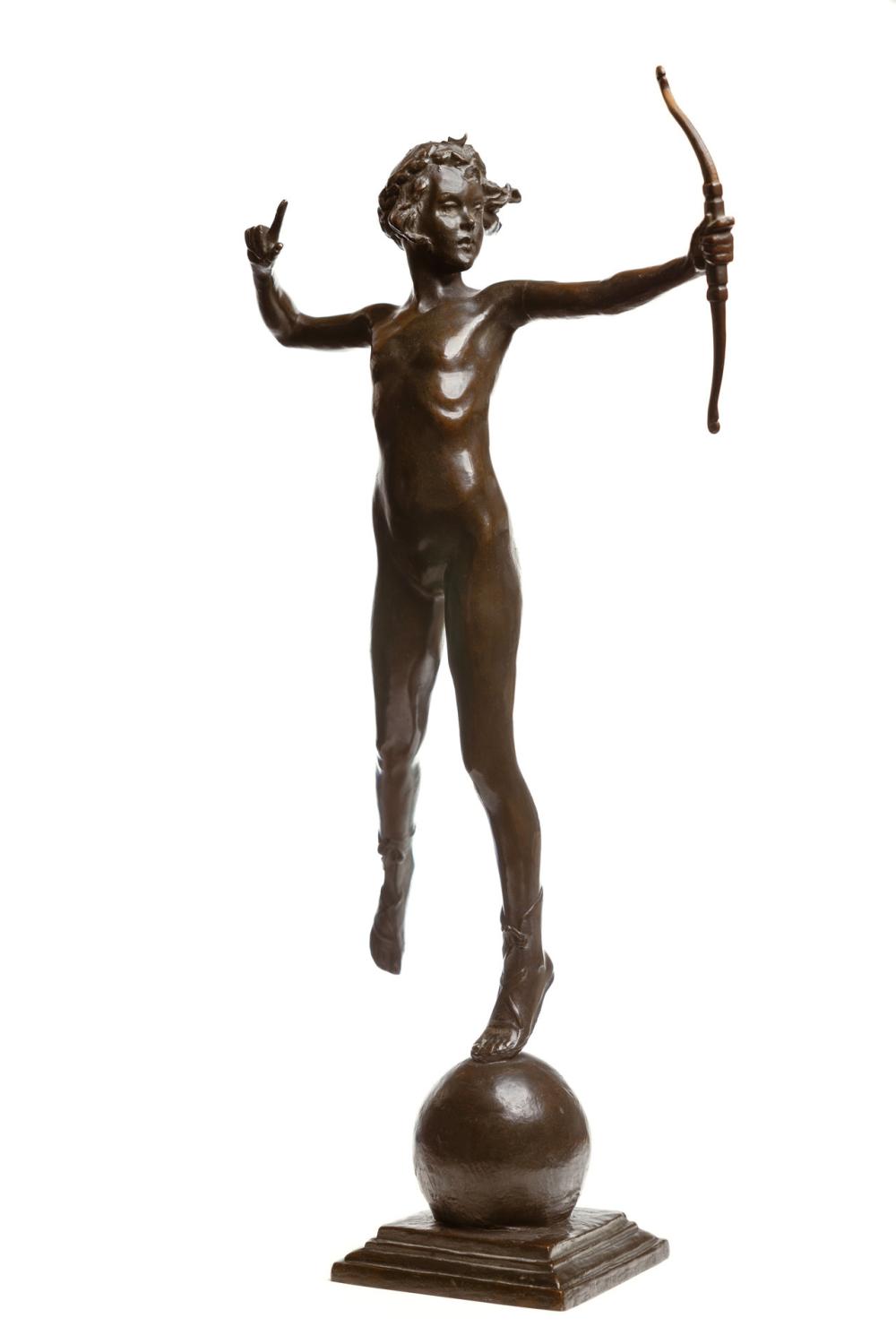 Janet Scudder holds an important place in the history of American sculpture, particularly of the early twentieth century. Her ornamental fountains in the Beaux Arts style were uniquely appealing at a time when most monumental sculpture was represented by salutes to war heroes and other male-centric political themes. After experiencing the horrors of World War I, Scudder noted, "I won't add to this obsession of male egotism that is ruining every city in the United States…My work was going to make people feel cheerful and gay, nothing more!"[1] The lauded Beaux Arts architect Stanford White commissioned many works for his wealthy clients from Scudder, including the Frog Fountain, Tortoise Fountain and Young Diana drawing her bow (a monumental version of the present lot).

Scudder was born to middle-class parents in Terre Haute, Indiana in 1869. Her father was a confectioner and her mother sadly died young when Janet was just five years old. She had a difficult childhood losing four of her six siblings before they reached adulthood and a step-mother who did not appreciate Scudder's nature. Charlotte Rubinstein writes, "Scudder was a tomboy, later recalling in her autobiography, 'I could skin a cat, hang by my toes… As for skating on ice in moonlight, no one could outdistance me.'[2] She remained adventurous and uninterested in so-called female pursuits for the rest of her life."[3] Instead, she was very interested in drawing, painting and other crafts. She had her first artistic success, and the one that meant the most to her, when she was still a child. She entered a hammered brass tray in the form of Medusa's head to the Indiana State fair and won the first prize.

Her artistic talent was evident by the time she finished high school. She enrolled in the Art Academy of Cincinnati upon graduation. From there, she continued her studies at the Art Institute of Chicago, worked in the studios of Lorado Taft and then Frederick MacMonnies, and completed additional training in Paris at the Académie Vitti and the Académie Colarossi. Returning to the States looking for work, she struggled to the point of deep despondency until finally obtaining a commission from the New York State Bar Association. The creation of their seal opened up additional commissions for her in portrait medallions and tablet memorials, and from there she attained continued lifelong success.

A feminist and suffragist, Scudder was a member of the National American Woman Suffrage Association and marched with Abastenia Eberle in suffrage parades. Her awareness of women's new sense of their bodies is shown in her Victory bronze, created around 1915 as a tribute to the suffrage movement. The dancer Irene Castle modeled for the work. The slim, almost boyish figure heralds the 'flapper' aesthetic that was rising to prominence as women threw aside their corsets and other constricting garments, shortened their hair and pursued a freer sense of movement. The youthful Diana evokes this same spirit with her powerful, athletic posture, nimbly balancing on the bronze ball pedestal while aiming her bow.

Scudder spent most of her later years in Paris, going back and forth from Paris to New York while handling a steady stream of commissions. She preferred Paris due to the stimulating social circle of women she connected with there, including Gertrude Stein, Alice B. Toklas, Mildred Aldrich and Eva Mudocci. During World War I, she turned over her villa to the YMCA to be used as a hospital and went to work for the Red Cross. She was named a Chevalier of the French Legion of Honor for this work. She returned to the states permanently at the outset of World War II and died soon after of pneumonia in 1940.

Janet Scudder was elected an associate of the National Academy of Design in 1920 and her works are held by the Metropolitan Museum of Art, the Art Institute of Chicago, the Library of Congress, the Musée d'Art Moderne de la Ville de Paris, and Musée d'Orsay among many others.