Back to catalog
Lot 65 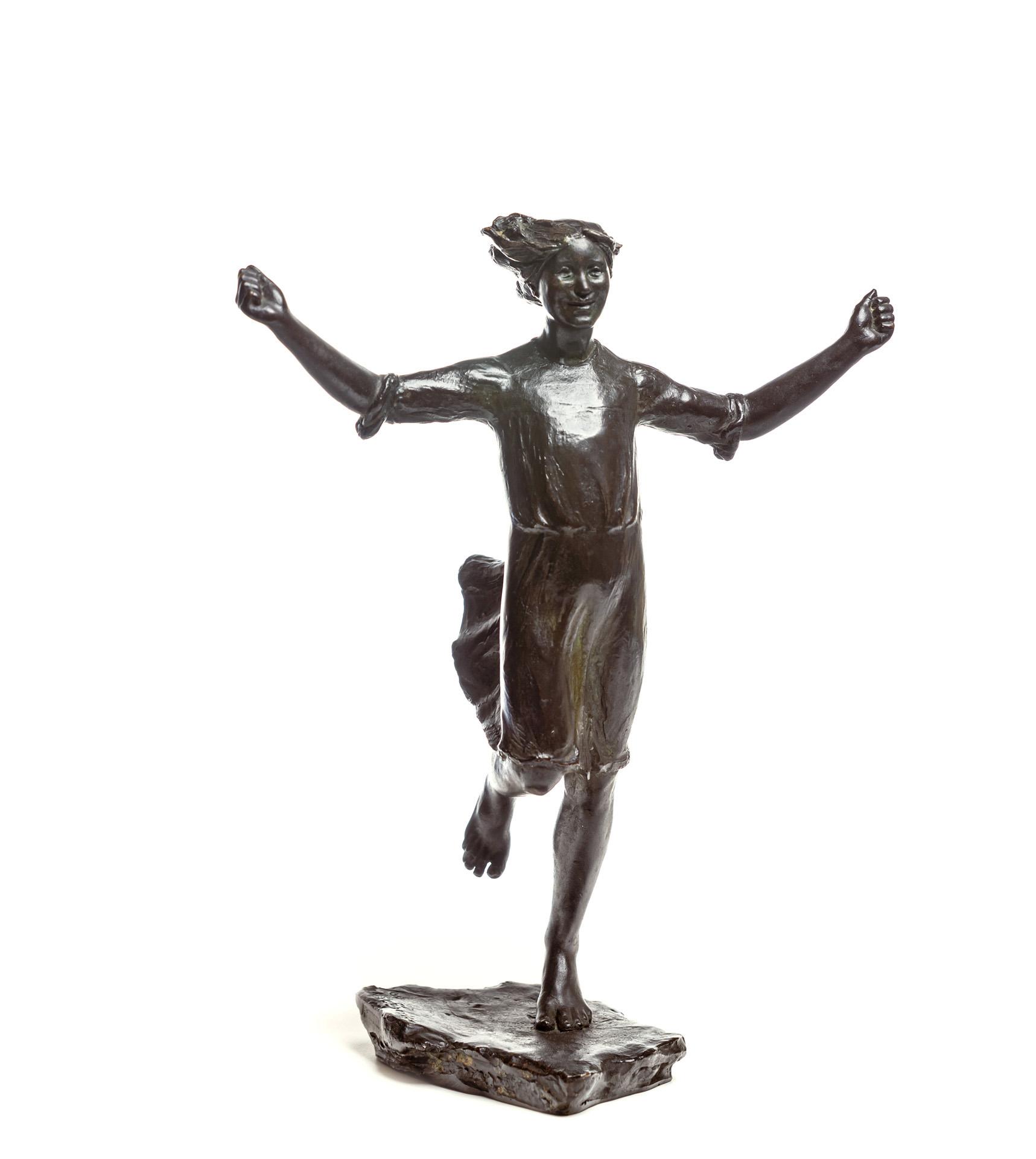 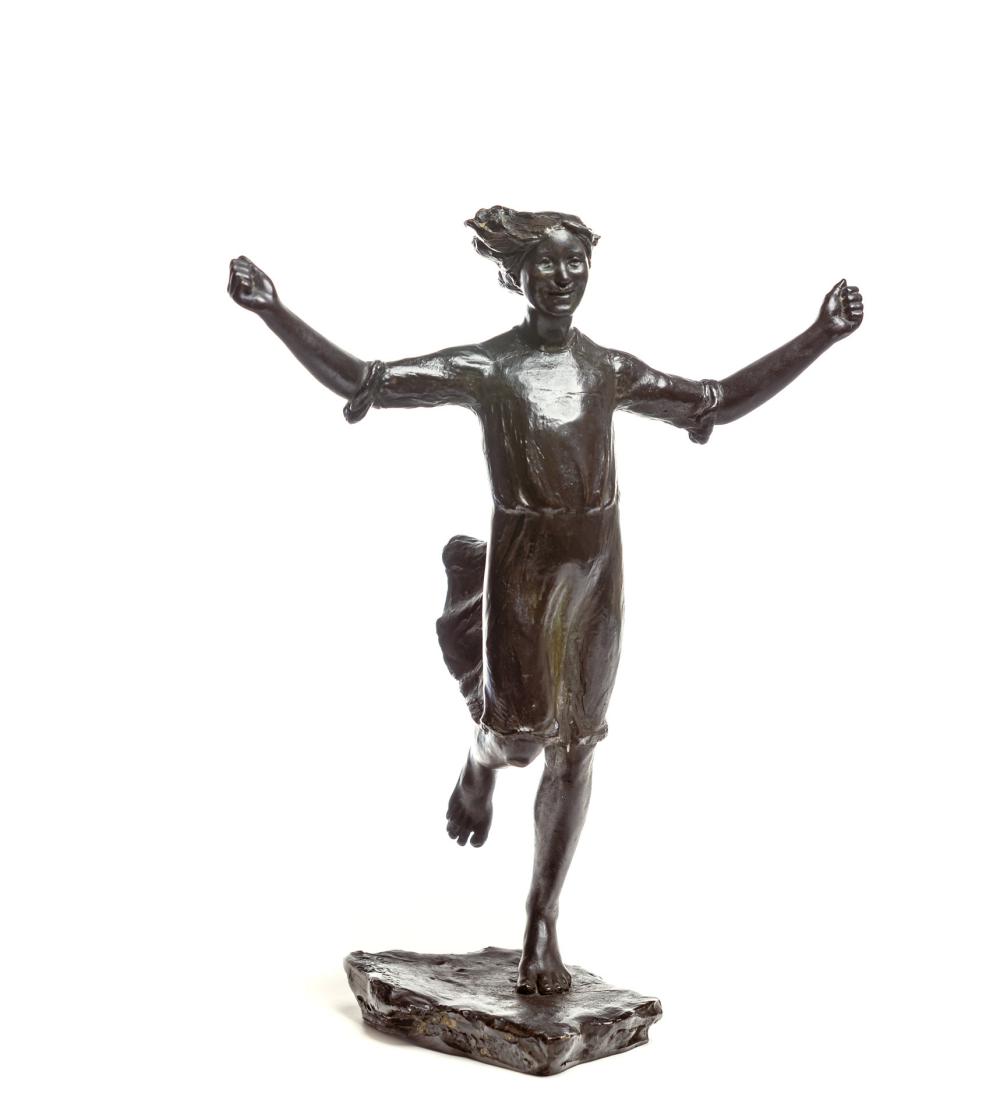 Abastenia St. Leger Eberle was born in Webster City, Iowa in 1878. At the age of twenty-one, she moved to New York, alone and with few funds, to enroll in the Art Students League where she was taught by George Gray Barnard. Prior to this, her formal training in sculpture was limited to a couple of years with Frank Vogan at the Canton, Ohio, YWCA. Eberle had a strong, innate talent and quickly made up for her lack of formal training. Barnard was so impressed with her that he often left his class in her hands when he could not be there himself.

During these early years, Eberle lived with several other young women artists - two musicians and the sculptor Anna Vaughn Hyatt (later Huntington) with whom she collaborated on at least three major pieces. In these collaborations, Eberle completed all the human figures while Hyatt created the animals. Gutzon Borglum, Huntington's teacher, urged them to submit their Men and Bull for the 1904 Society of American Artists exhibit, where it was greeted with enthusiasm by the jury, including Augustus Saint-Gaudens. Within two years, echoing the divisions in the art world, their careers went different ways. Huntington went to Paris to study and eventually focused her career on depictions of animals while Eberle remained in New York and became immersed in many of the progressive social issues of the time.

Eberle's breakthrough came as the art world began to take notice of her small figures portraying the street life of lower Manhattan, particularly the Lower East Side. At the time, it teemed with the city's recent Italian, Irish, and Jewish immigrants. One of her most well-known early works of this genre, Roller Skating (1906), was acquired by the Metropolitan Museum of Art. In 1906, Eberle was elected to the National Sculpture Society, one of only seven women since its founding.

Like many of her contemporary female artists, Eberle struggled to be taken seriously. This was evidenced by her reception in Naples, Italy. Looking to cast her work more inexpensively, Eberle went to Naples in 1907 and again in 1908. The foundry, never having handled the work of a woman artist before, had to be convinced that the work was indeed hers. Once they saw her at work, they realized their mistake and became respectful assistants.

In 1909, Eberle built a small studio in the burgeoning artist colony in Woodstock, New York. There, she modeled one of her most successful pieces, Windy Doorstep (1910). By 1910, Eberle was well along in a personal transition that in some ways mirrored the larger forces moving through the art scene, and in the world beyond it. She became active in the suffrage movement and lead a contingent of women sculptors in the 1911 women's suffrage parade. She organized a show of women artists in 1915 at the Macbeth Gallery to raise funds for suffrage. This event had a major impact on New York's 1917 state expansion of the suffrage to include women, and the state's subsequent 1919 ratification of the 19th Amendment.

The role of the artist, Eberle told The Survey, is to be "the specialized eye of society, just as the artisan is the hand, and the thinker the brain…the artist must see for the people-reveal them to themselves." According to the New York Evening Sun, "This is her way of helping combat the injustices and evils of our system. She does not preach; she makes us see."

Eberle's career flourished, and she had two pieces in the ground-breaking Armory Show of 1913. She opened a studio in Greenwich Village and then later moved to a studio in a Lower East Side tenement. Children, particularly girls, were favorite subjects and Girl Skipping Rope is quintessential for this period. She held the children of the tenements in great esteem as examples of the sometimes-surprising joie de vivre of youngsters, despite their surroundings. The barefoot child of Girl Skipping Rope is similar to the Roller Skating girl - arms akimbo, tattered dress, enjoying the physicality of this type of play - and showcases Eberle's mastery at evoking movement. In addition, this focus on unselfconscious young girls playing in a physical way was emblematic of the women's movement in the early twentieth century. Women were gaining a sense of personal empowerment which included throwing aside all the self-limiting, restrictive societal mores hoisted on them, particularly those coming out of the Victorian era.

Girl Skipping Rope was included in the Pennsylvania Academy of the Fine Arts 105th Annual Exhibition in 1910 as well as the Buffalo Fine Arts Academy's Contemporary American Sculpture Exhibition of 1916. It bears a label from the Poland Spring Gallery where it was exhibited in 1910. Most notably, Girl Skipping Rope was listed in the Panama-Pacific International Exposition catalog from 1915. This work, either a unique example or a from a small edition size, was likely the same cast from the Pan-Pacific Exhibition. It remained in the artist's collection and was later given to her friends and neighbors in the house adjacent her home and studio in Westport, Connecticut.

In 1920 Eberle was elected to the National Academy of Design and a year later the Macbeth Gallery gave her a one-artist show. By this time, heart problems that had begun to plague her in 1915 became more insistent. At just forty-three, she was forced to retire, working only when she had the strength and the means to hire help for the heavy work sculpture demands. She died in 1942.